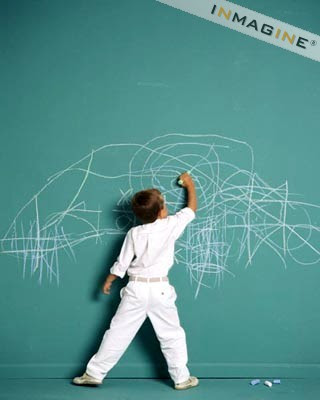 I recount practicing a week before the event. Excerpts from a book were read in an unhurried pace while each group member marked symbols on brown Butcher paper. The utensils included large Sharpies and colorful gel pens. The markings were smooth, rugged, and concise. The environment was very relaxed.

Fast forwarding to the day of the performance, I distinctly recall rapid heartbeats similar to the anxiety I experienced as a child before walking on stage. My eyes traced the strips of tape as Brianna stepped closer and closer to the end of the very last board. As I approached the stage, my brain was flooded with doubt and uncertainty. I feared making a mistake, my hand freezing mid-sentence, writing in an unusual language and breaking one of the few guidelines. Should I wait until the beginning of the next sentence? When should I begin writing? Do I have a second to breathe? How long is the poem? Why does this feel unordinary? I began writing, the chalk shattered leaving remains, I tried to catch up but I couldn't, his pace seemed deliberate, rehearsed. Was I not prepared? I paused in the middle of the board. Although, I had lost track Casey continued reading. The markings formed broken letters, fragmented sentences and indecipherable characters. A sigh of relief escaped my chest when I finally reached the very end of the board. I returned to a comfortable place in the studio and watched the upper half of the characters disappear. Why didn't I read the passage in entirety before the tape was removed? For some reason I could not remember the line of characters I wrote. Maybe this part of the performance was not intended to test memory but to build a community of collaborative art-makers.
Posted by Farolyn at 8:05 PM