Collaborative work with my 7th graders

Hi. So Thursdays I have a team of 10 7th graders that I work with. We are creating a project together and I find it hard to have them collaborate. Today, I even had them do a little team building exercise called the "Peanut Butter Pit (of Doom)" and I found two of my most vocal students wanted to be "leaders" though no leaders are required on the exercise. I had to say to them, "there is no 'I' in team" and I felt like a grandma saying that to them. Sure enough, Rezan and Myesha took the lead role in the exercise and I tried my best to moderate. It is kind of difficult to try and get the other students engaged when they allow Rezan and Myesha to take leader roles.

At one point I was asking the students their opinion on the design for our building ( a large mixed use building--a mall, gym, pool, rec center, skate park) and tried to ask them how we could divide the large building up into smaller buildings. As usual, the leader Rezan kept speaking up about how he thought it would be more convenient to keep it as one large building. I was getting a bit frustrated, because he kept talking and gave no one else a chance to speak up. So I said, "okay, so we know how Rezan feels about the building design. What are some other people's thoughts on what to do." I thought that would give some one else time to speak, but NO Rezan started to speak again. I was thinking...what? Are you kidding me? Sigh. It's hard to keep a project collaborative with equal participation all the time.

I ended up having the students sketch out their ideas on how to divide the buildings up in their sketch books privately for 15 minutes. That way they could work independently and not be influenced by others. When the time was up. We went around in a circle to show every one's drawings and then talk about each one for about 2-3 minutes. Afterwards we hung up the drawings on the wall and talked about the strengths of each ideas. we had a good discussion going and next week we are going to try and combine some of those ideas. So lets hope this collaboration works!
Posted by Mandeesa at 10:19 PM No comments: 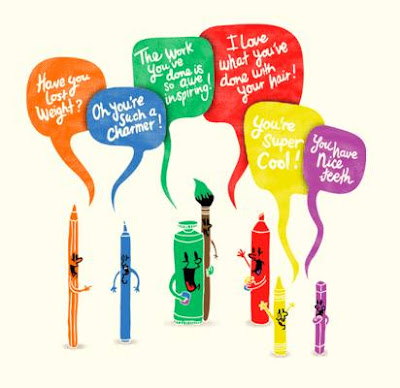 Cameras can be very intimidating. I was concerned about my posture and facial expression the entire time. It was easy to give compliments to people who looked amazing as opposed to a guy dressed in an unflattering tutu. Our day was well-spent and enjoyable. We captured spontaneous occurrences in front of the White House while complimenting random folks. I really enjoyed our conversation with the family from Boston. I sure hope they visited the Natural History Museum while in Washington. Would I change anything about our adventure? NO, because I learned a new definition for the term 'collaboration.' Collaboration: not easy, takes time and patience, worth the while, a learning tool, scary, intimidating, nerve-wrecking, requires structure, time, excellent communication skills, needs facilitator(s), and the eye. Last semester, a collaborative organization visited our class. The name of the group was Floating Lab Collective. Anyway, the group consisted of more than 50 members. Yikes! Can you imagine 50 people working on one project? Our team consisted of 5 very optimistic students. Mark and Nic were the camera crew. Myself, Tina and Sara were the compliment-anchors. While posted near a tree, the compliment-anchors would randomly give compliments to anyone. Well, maybe not. I spoke with Tina while standing on the 'stage' and we both decided that we could not just give people compliments especially if it was not sincere. A few other events lead to an unforgettable collaborative experience such as the rally for social freedom, the group of teens from Pennsylvania, and the large group of military folks dressed in clean white.
Posted by Farolyn at 10:03 PM No comments: