As of yesterday, our sculpture/display pedestal was still standing under the stairs. So I guess, even if our participation rate wasn't that high, someone must have considered it art to have allowed it to stay there for this long..ci9ci9okhtb g j/.≤≤≤≤≤≤≤≤≤(this is Quinn's collaboration) He is insisting that the computer is his- "mine, mine!" I guess this is a lesson in collaboration-pick your partners carefully. Collaborating with a volatile, temperamental artist (toddler) is not all that much fun. For obvious reasons this post is short today. I will write more about my thoughts on our project when my collaborator finally takes a nap!
Posted by Sara at 8:47 AM No comments: 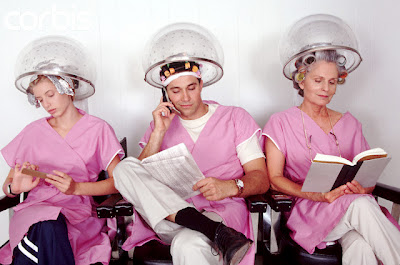 Project: "Let's record human interaction in a hair salon!" We began with a list a mile long, from turning a hair salon into a recording studio to disrupting the natural flow of bar conversation. It took a few weeks for our project to take flight. We decided to dismiss the hair salon and bar idea early on. Our next plan consisted of myself, Mandy and Tina interviewing businessmen on Capitol Hill. This idea was neglected after we considered the odds of capturing 30 seconds of a businessman's attention on Capitol Hill during lunch hour. After many sketches, we landed upon the idea of interviewing art museum security guards. Our audience broadened to include hospital professionals as well as several passerby on 17th st. We entered jewelry stores, and local galleries to find an answer to a question that is too often debated: 'What is the definition of art?' This question left many interviewees puzzled. I can only imagine the thoughts that ran through most of their heads. They probably wondered why a couple of art students felt their definition was so important. I must say I enjoyed working with my fellow team members. After tons of planning, we were able to nail a topic and run with it. Our encounters with several passerby has inspired me to strike up conversation more often regarding the definition of art. I agree with Tina, we definitely could have benefited from more time for interviewing. An average interview lasted 20 - 25 minutes. Mandy made a good point also in her post below. Who knew one question would lead to a half an hour conversation about art classes, poetry, Frank Gehry and a lost wallet?

Conclusion: This project was tons of fun. I am very glad we stepped outside of our original plan. Interviewing strangers was far more exciting. Everyone enjoyed sharing their definition or idea of art. This experience was different from the hospital in many ways. The hospital is quiet, sterile and usually considered the last place anyone would want to schedule a vacation. The Corcoran neighborhood was live and filled with many unique individuals whose occupation, name, and residence remained hidden. The hospital provided an honest environment where techs and nurses did not mind taking a few seconds out of their work day to answer a question. Overall, this project allowed me to work on my collaborative skills. One idea spoken by one person belongs to the whole team. 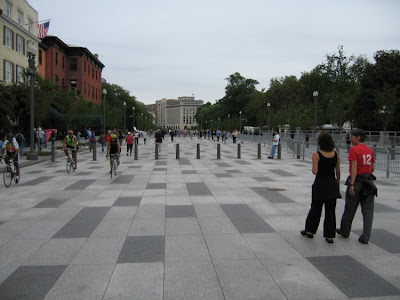 Posted by Farolyn at 7:34 PM No comments:

Reflection on the Collaborative Project Experience

First off this was a very new experience for me. I have not done much collaborative work in any way. AND I am only child and I am use to getting what I want. This made this experience slightly difficult for me (I stress slightly!). There were times where I just wanted to do what I wanted to do and do it myself. I don't think my group members noticed this or picked up on it. I think I kept it well hidden. Every time this urge or longing came up I nudged it aside and talked through it with my members. With 3 great minds coming together there were times, in the beginning, where we had so many good ideas that we could have gone with that it became a little overwhelming. I almost wish we had more time. I also wonder what would have happened if we had done some of our other ideas instead.
The process of conducting interviews was different in each place we did it in. Talking to the security guards at the NGA was more difficult than I originally imagined. Some of them didn't really want to talk, some of them at first resisted but then came around and got into it, and then 1 of them would NOT STOP TALKING! I think they all had good things to say,  and brought up good points and prespectives that I had not thought about myself.
When we took our interviews out onto the street it was really fun. We went up to random people and asked them to participate. I could tell that with each of them they all had an idea or thoughts on the question we presented them. However, like Mandy said in her post, some of them couldn't quite the words out right. That is totally understandable cause they are caught off guard, they got 3 smiling art students staring at them, and probably right at that moment right before we approached they were thinking of something totally different. So yes, they might have had a hard time articulating their thoughts but I don't think they didn't already have somewhat of an idea in their head of their opinion.
If I had the chance to do it again I would do a couple things different, I would take along a voice recorder or a video camera and I would take pictures. Also I would give myself lots and lots of time so I could talk to many people (cause each one of them was probably almost 20 minutes give or take).
All in all it was a creative, eye opening experience that stretched me as a person, a student, a future teacher, and as an artist and I value the time spent!
Posted by Tina at 5:54 PM No comments:

So far I have really enjoyed the process of this group project. As you may have read the interviews have been very fun and insightful. I already knew that every person has a different definition of art. However, what I may have known before but didn't expect to find were that people had different comfort levels at answering this question. A handful of people stumbled through their answer often repeating themselves. I noticed that they were very eager for the interview to end. It could have been that they weren't comfortable answering what their definition of art was, because maybe they had never thought of it. Then while that thought occurs to them two or three sets of eager eyes are awaiting their response. That might put some pressure on people.

Right now we have some wonderful hand written responses to, "what is your definition of art," but on friday we will elaborate on that question a little further by asking our classmates and Mark to respond to the question VISUALLY. Bring your creative hats people! Time to express ourselves!

I am very much looking forward to class on Friday. I wonder if I'll see Jesus walking down the street carrying a cross again?
Posted by Mandeesa at 1:11 PM No comments:

As you may or may not have known, my team has been conducting interviews in various places to ask people their definition of art. I find their responses to be interesting, but the conversation that stems from that question is amazing. To me, I thought we would just walk up to people to ask them our questions, they would respond for maybe five minutes tops, and then we'd go on our merry way. To my surprise, people are very eager to talk about more than respond to our question.

Our first extensive interview was at the National Gallery. We interviewed a security gaurd and he went on about his response. That was fine because it is a pleasure to have an interview with some one who has a lot to say. However, this interview turned into him telling us about works of art in our immediate area that he found "inspiring" and also artists that he thought made an impact in a certain decade or art movement. I would say our conversation with him went on for about 20-25 minutes. As soon as I thought we were done, we thanked him and went our separate ways only to have him come after us again for a fact that he forgot to mention before. I thought that was pretty funny.

We did about five interviews at the National Gallery. The next set of interviews we conducted were right by the Corcoran. We stopped in front of the Renwick and interviewed two seperate people. The first interview Farolyn has already blogged about--the two women sitting on a bench. I was really surprised by the "fiesty woman's" personality. She was so outgoing and telling us--complete strangers--all about her life and poetry. She even got pretty smart with us and bossed me around at one point! She told me to stand in front of her (I was standing off to the side. My feet were starting to swell and I was getting tired. lol.) We spent another 20 minutes with these women and they made me laugh. I could tell that they had been friends for quite some time cause all they did was laugh with each other. They were very comfortable with each other.

The last interview that took me by surprise was an older gentleman who was sitting on a bench across the street from the Renwick. We asked him our standard question and after he responded he went on to tell us about his day...how he lost his wallet, and more information on his background. He asked us information about us and even wanted to see images of Farolyn's work. I believe we spoke with him for about 20-25 minutes.

Morale of the story, I am surprised at how much people are willing to talk. I watch people standing on the corner of streets trying to get people's signatures/money for various organizations and people just ignore them on the street. I thought our interview process would be just as painful, that we would be struggling to get people to talk to us. Infact, it was hard to get people to STOP talking to us. haha. Who knew that art could be such a great starting point to conversations? Or maybe people will just talk when three lovely girls are listening. :)
Posted by Mandeesa at 12:37 PM No comments: