NEXT WEEK'S READING: "The Emancipated Spectator" 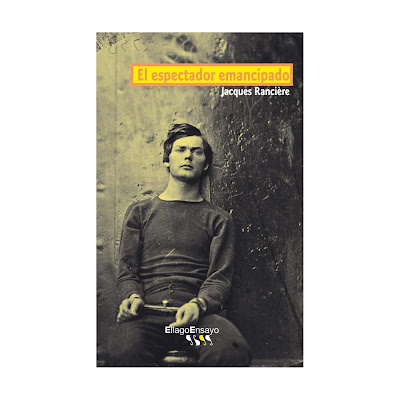 The Assigned Reading for next week (Apr. 10) is “The Emancipated Spectator” by Jacques Rancière. The following is from The Flexible Reader:

Ranciere begins by claiming an affinity between Brecht and Artaud’s approaches to theatre, rooted in their opposition to Plato’s dismissal of theatre.  But he goes on to claim, instead, that both sides of this polemic keep the audience and performer alike caught in a transfer of power and incapacity.   “It starts when we realize that looking is also an action that confirms or modifies that distribution, and that ‘interpreting the world’ is already a means of transforming it, of reconfiguring it.”

Posted by Mark Cameron Boyd at 2:36 PM No comments:

PAD.MA and The Patriot Library

Posted by spicedplumbob at 3:58 PM No comments: