What: The artist goes around to schools, originally starting in New Orleans before branching out through the country, having children make “Fundred Dollar Bills” from premade templates. These fake bills are then organized and placed into armored cars that have been modified to run on vegetable waste oil. The bills are delivered to congress.

Why: On a post Katrina visit to New Orleans Mel Chin discovered that the soil contained 4 times as much lead as deemed safe. He also discovered that the government had known about it before Katrina and had no plan to correct it. It was said to contribute to the epidemic of lead poisoning that 30% youth in the area have suffered. He has stated his main concern is awareness.

Accomplishments: Mel Chin has raised a lot of awareness through out the country. In 2010 his “fundred dollar bill” trucks traveled nation wide and collected around 400,000 fake bills to send to congress. He has also begun to implement a neutralization process in New Orleans and is backed by the EPA in Oakland, CA.

What: Burns and Young mapped out fruit trees within a five-block radius of their homes. They then provided the maps to the public and encouraged them to pick the fruit. LA property laws are unclear on the ownership of these trees when then exceed the property lines such as hanging over a fence. This is then is used to make jam as a social event in markets galleries and museums.

Why: Public Fruit Jam is a social commentary on the way people today socialize as well as the relationship between the wealthy and less fortunate.

-       Both rely heavily on participation from the outside community
-       Both speak on the idea of who has the upper hand in the idea that the government didn’t choose to correct the lead and the stereotypical idea of the wealthy.

-       Mel Chin works as a single artist while Fallen Fruit is a collaboration
-       Operation Pay Dirt was about political reform in the environmental care for New Orleans. Public Fruit Jam was a less forward and aggressive way to comment on the idea of those who hold power.

PARTICIPATION
The project was a three bedroom apartment in an urban
part of town designed and equipped for the public to
interact both artistically and normally together. The
goal was to, “encourage creative, communal interaction.”

COLLABORATIVE COORDINATION
They’re an artist collaborative and involve both private
and public parties in the apartment for performing
workshops or to hold exhibitions.

REPRESENTATION
“Where artists, architects, musicians, neighbors, and
children would congregate informally to plan projects,
hold get-togethers, and exist communally both within
and outside of the context of art.”

PARTICIPATION
The entire community of St. Pauli and Hamburg could be
part of the project. Park Fiction (the name of the project),
was an area (one of the only area’s), in Hamburg where
people could meet to play, hold shows, and relax.

COLLABORATIVE COORDINATION
The project involved many association’s as well as the city
council to keep the public park space from turning
into a housing development.

POLITICAL IMPACT
The people involved built a mobile “planning container,”
a container to document questionaiires, pictures, maps,
and thoughts throughout the neighboorhood. This was
to gain culture capital to recieve funds from the city’s
Art in Public Space program.
Developers bid on the land to build a high-rise. 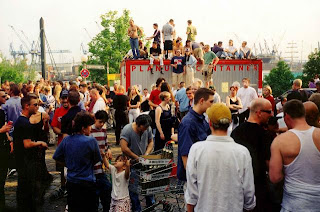